Many meteorologists talk about the ‘average first frost’ date, but half the time frost will arrive sooner! Below find your region’s historical earliest freeze (32 degrees). Be aware that microclimates even within your own garden can expose plants to frost despite the thermometer reading. Taking the recommended steps outlined here can increase the chances of your plants surviving an early freeze, prolonging the growing season. 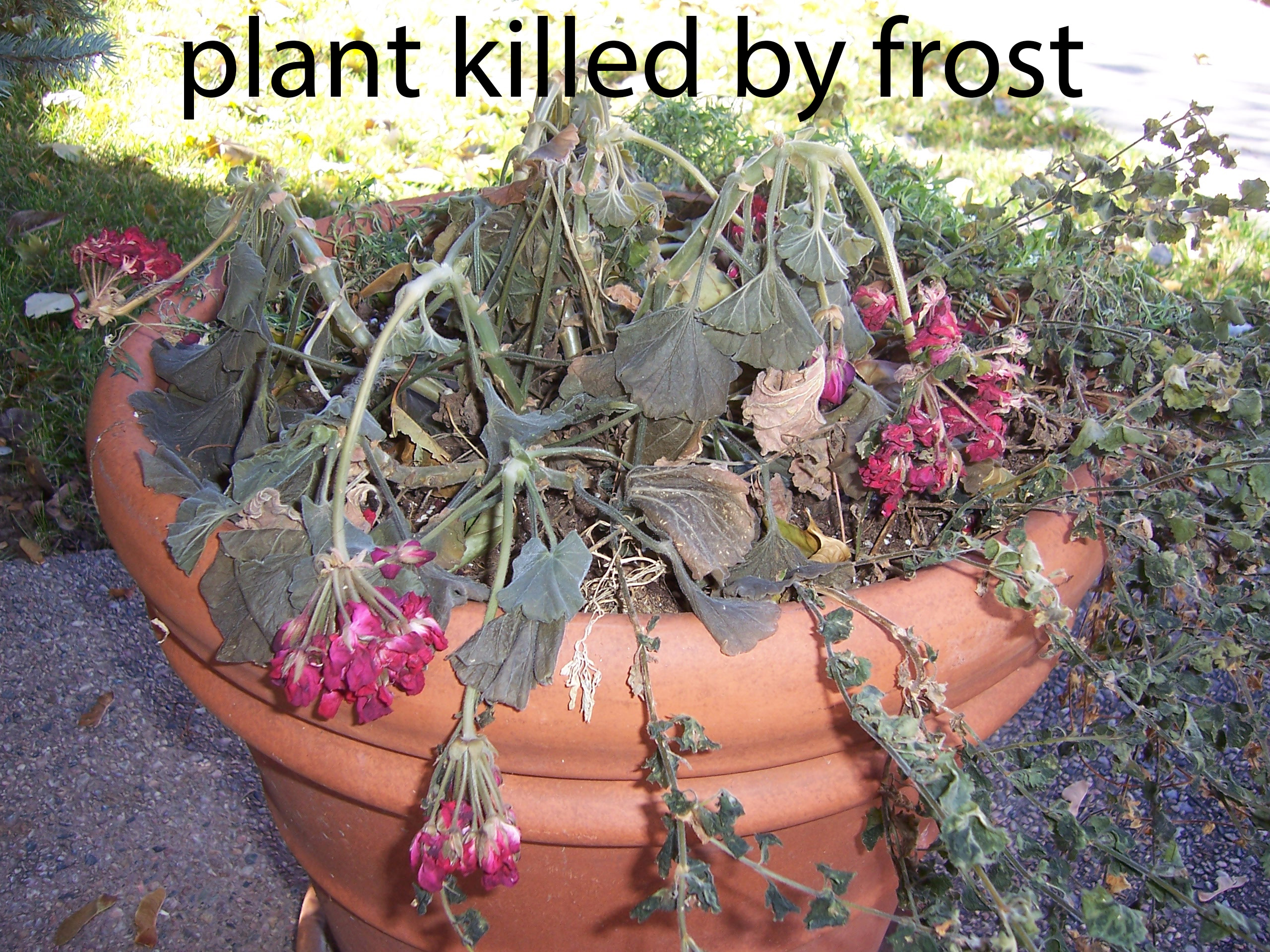 Ever hear that saying? It's telling you that on a clear night, in fall, winter, or spring when you can see the moon, frost is likely to occur. This is because there is no wind to mix ascending warm air with descending cold air and there are no clouds to radiate heat back to the earth. There are other factors that influence whether or not your plants will experience frost, so let's understand what causes frost to form.

Frost is frozen water that has condensed from water vapor in the air. For frost to occur, surface temperatures must be below freezing (otherwise you would see dew, not frost). Frost forms on plants when they are colder than the dew-point temperature of the surrounding air.

What's the difference between light frost and severe frost?

Classification of freeze temperature is usually based on its effect on plants. A light freeze is 29°F to 32°F — tender plants are killed with little destructive effect on other vegetation. Moderate freeze is 25°F to 28°F — widely destructive to most vegetation, with heavy damage to fruit blossoms and tender and semi-hardy plants. Severe freeze is 24°F and colder — damage to most plants.Frost is rated by the severity of the frost layer. The higher the dew-point temperature, the more water is in the air, and the higher the rate of frost accumulation. Light frost will damage smaller plants more than larger, established plants. Severe frost will damage and even kill most plants that are not dormant.

Common types of damage include:

The effects of temperature vary with plant species, stage of growth, age, general health, and water content. Young, actively growing, flowering, and/or dehydrated plants tend to be most vulnerable. Actively growing foliage is very susceptible to frost damage. If a freeze occurs when there has been no prior cold weather to "harden off" a plant, the damage will be more extensive. 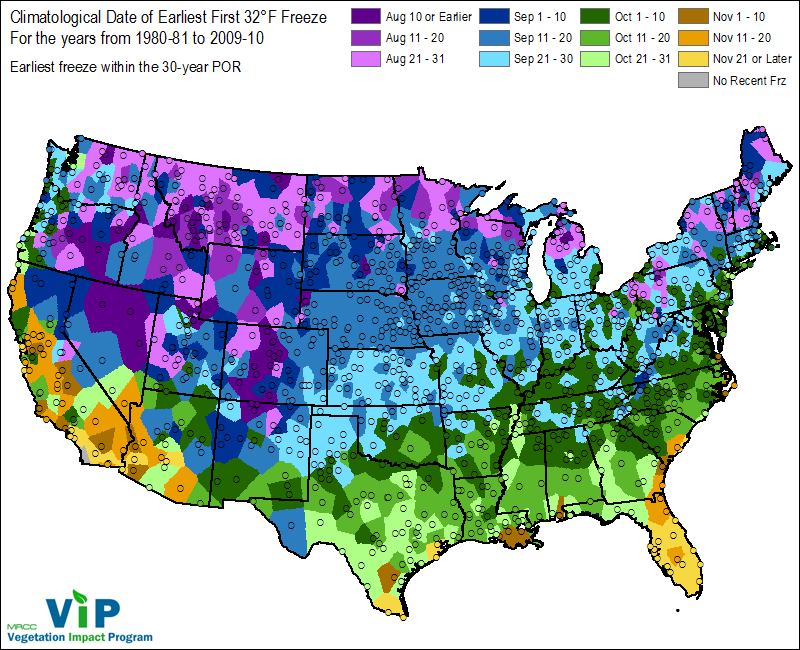 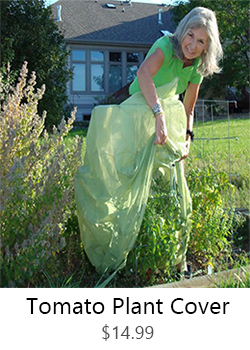 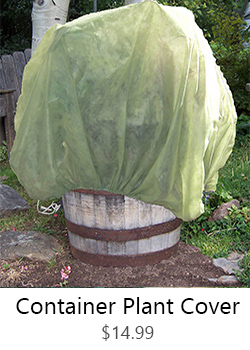 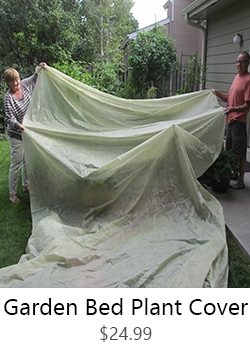 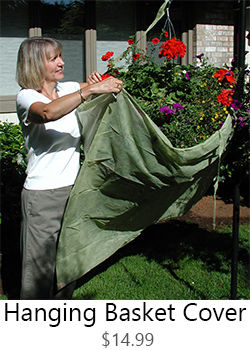 Cover plants with professional-grade spun polypropylene fabric, such as Frost Protek® Plant Covers. If not available, use cloth or paper (not plastic) to insulate. Sheets or blankets provide minimal protection and can crush plants. Various frost cloth weights can be effective at temperatures down to 20° F depending on the fabric and the weave. Frost Protek® Plant Covers are made with 0.9 oz (30 gsm) fabric, which will provide protection of 4-6 degrees, or to about 26 degrees F.

Completely drape the plant from top all the way to the ground, or around the container. Do not allow any openings for warmth to escape. This procedure will trap the heat radiating from the soil and maintain a more humid atmosphere around the plant foliage. Many Frost Protek® Plant Covers are designed with a double pull drawstring and cord locks to secure the cover tightly around the container, providing better insulation.

Some professional grade frost cloth, including Frost Protek® Plant Covers, may be left on for extended periods without risk of harming the plant because the fabric allows air and UV light to penetrate. If you use sheets or blankets, remove them every morning since these materials can suffocate the plant.

Western and southern exposures tend to be warmest. Block walls, rocks and patios collect and reflect the heat of the sun. Firm, bare, moist soil absorbs more heat and loses it more rapidly than soil that is loose, dry, or covered with mulch or vegetation.

Keep plants well watered. Frost injury occurs when ice crystals form on the leaf surface drawing moisture from the leaf tissue. The damage from this dehydration will be less severe if the plant is not already drought-stressed. It is best to keep the moisture level as even as possible.

100-watt electric light bulbs, in an approved outdoor fixture, can provide supplemental heat to covered plants, if needed. Be sure to hang them below the foliage, allowing the heat they generate to rise (within the covered area) and warm the plant. Take care that the bulb is not so close to the trunk, branch, or cover that it could burn.

Using mulch has good and bad points. It insulates against fluctuating surface soil temperatures and guards against too much daytime warm-up that, in turn, would activate plant growth and increase freeze risk. However, it also prevents the capture of heat that could be harnessed to protect a frost sensitive plant.

WHAT NOT TO DO

Do not use plastic to cover plants. Plastic is a poor insulator and can harm foliage. Do not prune or throw away frost-damaged plants until they begin growing in the spring. Pruning might stimulate new growth which would be vulnerable to late frosts. The frost-damaged leaves and stems will continue to help trap warm air within the canopy. In addition, the damage is often not nearly as bad as it initially looked; new growth may come out of tissue that you thought was dead. Only after new growth starts in the spring should you prune out dead wood.